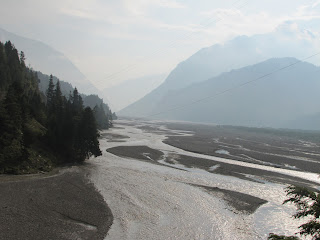 In his famous poem “The Rime of the Ancient Mariner,” Samuel Taylor Coleridge describes the plight of unfortunate sailors aboard a doomed ship, who were surrounded by ocean water but for obvious reasons could drink none of it:  “Water, water, every where, Nor any drop to drink.”

In a similar way, as I trekked through Himalayan mountain villages in the northern reaches of Nepal, I saw water in abundance.  We walked through it, forged a path over it, and watched as nationals enjoyed it with no apparent problem.  But pure, unadulterated water was harder to come by.  In the West, it’s something we take for granted, imbibing the liquid in abundance and without hesitation, even from a city drinking fountain or a faucet in our own homes.  We think nothing of the ice that floats in the cup we get from the drive thru at our favorite fast food restaurant, and most of us haven’t experienced a waiter asking us if we would prefer the water hot or cold with our meal.

However, as with nearly every other aspect of life in Nepal, water is something that Westerners must consider on mountain treks or city walks.  Drink it from bottles, or don’t drink it at all.  Purify it, but don’t touch it to your lips unless you’ve done so.  Twice when brushing my teeth I forgot the water lecture the missionaries had given and inadvertently consumed tap water.  Their warning was good to heed.  Glancing at the Centers for Disease Control website, you’ll find warnings for travelers that include the possibility of typhoid or Hepatitis A resulting from contaminated water in Nepal.

But clean water in the physical form can easily be obtained by Westerners. It’s not expensive—about 20 cents a bottle in Kathmandu.  And yet, without it, the trip would be impossible.

Two millennia ago, people’s need for water was the same.  One woman came to draw water for her household when she met a Stranger at the town well. After speaking to her with a perception that no other human had ever done before, He said, “Whosoever drinketh of this water shall thirst again:  But whosoever drinketh of the water that I shall give him shall never thirst; but the water that I shall give him shall be in him a well of water springing up into everlasting life.”

It is that eternal water supplied by the Fountain of Life that Nepal needs more than a clean water source.  According to Operation World, only 2.85% of Nepalis even claim to be Christian.  How else will these millions hear that they can obtain everlasting water unless Christ's followers proclaim His truth to this needy nation, where scores of ethnic groups have yet to learn of such a wellspring in this spiritually parched land!

Posted by Thomas & Heather Ross at 8:03 PM No comments: 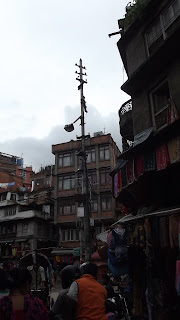 The nasal mantra of the Buddhist stupa sounds in my ears the entire trip back to America, even as I traverse Irish streets in the small town of Sward, where I am struck with a compelling contrast. For over a fortnight I've been confronted with an eastern culture.  Now I am face-to-face with the West.

Clean roadways, neatly manicured lawns, symmetrically framed houses--each contrasts sharply with the world I've left behind in Kathmandu, where rugged houses of brick and concrete tumble in shambles, garbage litters city thoroughfares, and humanity plods forward at a leisurely rate. Where boxy tuk-tuks, crammed with people, vie for road space amidst racing motorbikes and overcrowded buses.  Where dust and dirt cover the entire city in a film-like layer that housewives daily battle with buckets of water that they douse outside their living spaces.

How needful then, for us in the recycle-conscious region of the world, where garbage usually remains in bins and dumpsters, where a plethora of choices abound in the well-stocked supermarket, where wealth, even in what is considered "poverty-stricken" areas, is manifested if, in nothing more, than in the well-proportioned sizes of the citizenry, to remember the needs of our missionaries to this culture, as they confront head-on a worldview so different from their own.

Remembering the need from East to West, let us follow the Lord's command in Psalm 2:8--"Ask of Me, and I shall give thee the heathen for thine inheritance and the uttermost parts of the earth for thy possession"! 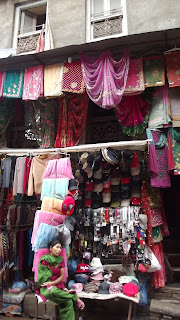 Kathmandu.  It's a city I never thought I'd grow to love when I was first introduced to its dirty streets, harrowing taxi rides, and 30,000 street dogs.  But as our plane prepares to taxi, I feel two drops of tears in my eyes.  I gaze out my window at Kathmandu Valley, a city area of about 7 million people, and see the various colored homes, triangular-shaped Buddhist pagoda, and pointed golden tower of a Hindu worship site.  Mountains, cloaked in clouds, hover in the distance, and I remember the magnificent Himalayan peaks which seemed so tangibly close on our trek just one week ago.


But these tear buds have not been the first ones today.  The others came as we were dropped off at the airport and Dawa, a Nipali friend who also worked as our Tibetan trekking guide, reached into his pocket and pulled out five silken white scarves, which he and the missionary we visited tied about our necks.  "A Tibetan custom," Dawa explained to our group of five, "when saying goodbye."  So this token of love and friendship added its own special quality to our outfits as we made our way to the departure gate.

Last night I felt tears, too, when we gathered in Dawa's home for dal baht, the traditional and daily Nepali dinner of baht (rice), dal (lentils), and various vegetables accompanied by atchar, a spicy tomato sauce like salsa.  Dawa blessed the food, praying in Nepali.  His sister had labored for hours in the kitchen, making fresh roti (Nepali flatbread), frying massala-spiced papad and preparing so many special treats just for us.

We five American visitors, with the missionary family, crowded about a coffee table in Dawa's living room, occupying the bench and chairs there where the open window on this third-story flat spared us from being choked by the stifling heat of the warm summer evening.

The furnishings were bare, a 3-inch soft cusioned mat of about 5' x 6' providing seating for the children on the floor, a TV in the corner with Hindi Nickelodean playing, and then the table, about which we were setaed.

When the power went out at 7:30 p.m., we powered up a lantern the missionary had brought and ate by its light.  Later, after fresh mango and delicious butterscotch ice cream, Dawa brought out his guitar and we sang several church songs.  "This is the Day," sung first in Nepali and then in English, was the first, with each of our group taking part harmonizing with the melody.  After a long game of Phase 10, which Dawa won, we had gone to bed.

And now I will miss this place and the beautiful people I have met, the musical accompaniment of a foreign tongue coloring every day experiences, the crowded bus rides, the gentle cows roaming the streets, and the chorus of street dogs every night, punctuating the evening sleep like a grandfather clock sounding each hour.

But through my travel journal and the thousands of pictures our group shot, my memories can be kept alive.  And, most importantly, the reality of the needs of these people can be addressed in prayer to the one who observed, "The harvest truly is plenteous, but the laborers are few:  Pray ye therefore the Lord of the harvest, that he will send forth laborers into his harvest" (Matt. 9:37-38).

Indeed, the reality of 30 million+ of Nepal's inhabitants can be mine each day as I acquire Christ's vision for the needy and numerous Nepalis in this world.
Posted by Thomas & Heather Ross at 8:38 PM 1 comment:

Thomas & Heather Ross
We are a husband and wife, saved by grace through faith.